The Hellenic Hydrocarbon Resources Management (HHRM) has actively participated in the 3rd SEE Hydrocarbons Upstream Workshop, co-organized by the Institute of Energy for South East Europe (IENE), which was held on Tuesday 30th and Wednesday 31st October 2018.

Yannis Bassias referred to the developments at the hydrocarbons field and especially at the industry's interest in the deep and ultradeep sea waters of Greece, as well as at HHRM strategy to inform the investors and the public. As he noted “Τhe promising future of hydrocarbon exploration in western and south Greece offshore, and the East-Med pipeline project – one of the largest energy supply projects in Europe – are parts of the development that take place in Greece as a very important geostrategic plan, particularly after the gas discoveries in Israel, Egypt and Cyprus along with the Trans Adriatic Pipeline (TAP) which will bring natural gas from the Caspian Sea to the European market. Further, the exploration activities in the Black Sea, in water depths of over 2,000 metres as well as future activities in Greece, in similar or even greater water depths up to 3500 meters, will place the country at the spearhead of drilling technology, offshore safety and production for which HHRM is already the competent authority through the Greek and the European law. In the last five years the percentage of production from deep offshore drilling rose to higher levels reaching almost 30% of world oil production. Companies or joint ventures share the investment risk for exploration and the development cost, as in the case of joint ventures in Greece. Since 2016, HHRM has organised its technical and financial structure in order to meet its priorities, which include the effective management of the contractual obligations of the operating companies in Greece as well as the negotiations of the terms for new concessions on behalf of the Greek state. The company continuously updates the international scientific community and investors of the industry. In the current period and for the coming months, HHRM will intensify the plan to promote and attract investors for the exploration and exploitation of hydrocarbons in five new marine regions in the South Ionian sea and Southern Crete”.

Katerina Kostakis, Maria Matzakou and Nikos Barkas, underlined the issue of Safety of Offshore operations in Greece and the role of HHRM: “HHRM has been appointed as the Competent Authority of L. 4409/2016, which transposed the European Directive on Safety of Offshore Oil & Gas Operations. In its regulatory role, HHRM assesses and accepts Reports on Major Hazards and Notifications submitted by Operators and Owners, oversees compliance through inspections, investigation and enforcement actions and cooperates with other EU Competent Authorities. Taking extremely seriously account of offshore safety in the wider region of the Central East Mediterranean, HHRM has launched targeted partnerships with other European countries. In 2018, HHRM successfully assessed all submitted Reports on Major Hazards and will continue in 2019 for new production installations and drilling rigs that intend to operate in Greece”.

Kostis Oikonomopoulos, Georgios Makrodimitras and Nikos Papadimitriou presented the seismic tools and structural setting offshore south Crete: «A frontier area is an area where the exploration activities have not been carried out or an area with short-term exploration. Offshore south of Crete is such a frontier area with debatable and controversial complex geological processes together with the lack of data. The region has been split into three (3) distinct geological provinces – the Cretan Margin (CM), the Backstop (BS) and the Mediterranean Ridge (MR). Each of these provinces exhibits different geological and tectonic features and therefore any possible petroleum systems would comprise different elements».

Offshore western Greece was the main topic of Spyros Bellas and Vasiliki Kosmidou presentation. As noted: “A huge and challenging offshore acreage is not yet granted in the western / central Ionian Sea, south and west of the offshore blocks awarded this year. The Kefalonia Tranform Fault zone (KTFz) subdivides the area into two distinct sectors, north and south. HHRM’s interpretation of the 2D MC seismic campaign, shows geological and bathymetric similarities for these sectors. The Fault and Thrust Belt system (Hellenides) and the Abyssal Plains (either Calabrian or Ionian) are present in both sectors in deep to ultradeep waters. The northern sector consists in the Apulian undeformed carbonate platform and the Pre-Apulian Basin, both bearing relevant H/C intraplatform plays of the Adriatic. Further, this sector presents faulted blocks at the base of the platform and mature source rocks with stratigraphic traps. The southern sector bears structural plays of Triassic evaporite packages and Mesozoic carbonates, a key role in H/C trapping. The Messinian evaporites are well developed, deformed and provide a good seal”.

Nikos Papadimitriou, Kostis Oikonomopoulos and Georgios Makrodimitras informed the public regarding the chasing of hydrocarbon reserves in Carbobate Buildups, presenting examples from East Med: «Carbonate platforms are spectacular features which are formed by carbonates largely of biological origin. In petroleum industry there have been always an attractive target for hydrocarbon reserves. For the petroleum geoscientists confident identification of carbonate platforms in offshore areas through seismic interpretation is a fist order challenge. While it is difficult to propose a universally applicable criteria mapping the position of the platform slope as well as the comparison with similar analogs could be a useful tool for the exploration geologists». 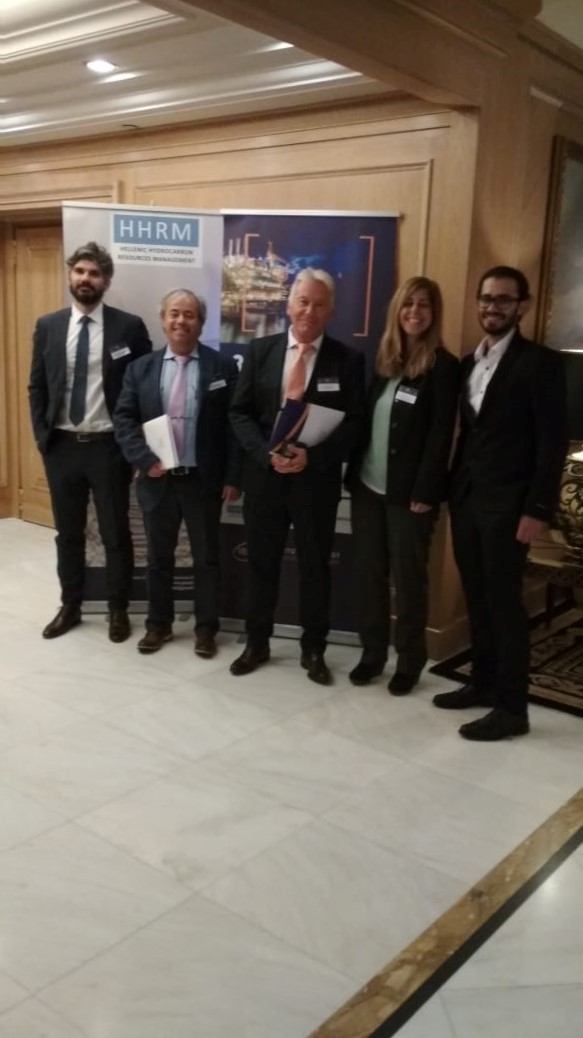