The developments in the field of hydrocarbons in Greece and the key role that our country will play, along with the gradual development of technology for exploration and exploitation in deep and ultra-deep seawater, were presented by the Chairman and Managing Director of the Hellenic Hydrocarbon Resources Management (HHRM), Yannis Bassias, at the 6th Congress of the Eastern Mediterranean Gas Conference held on 6th and 7th March, in Nicosia.

HHRM participated in the inaugural session (1st day of the conference), which concerned of the current situation in the Eastern Mediterranean, and was attended by important institutional actors and representatives of international energy companies such as ExxonMobil, Total, ENI, and Energean Oil & Gas and Greek Petroleum. The input of the companies Schlumberger and Halliburton, as regards the region's current ability to meet the needs of gas drilling and treatment facilities, were also particularly interesting.

HHRM highlighted the significant geographic location of Greece in the Mediterranean, where important research and extraction projects are being carried out or are planned, such as in the Southeast Mediterranean and the Black Sea. 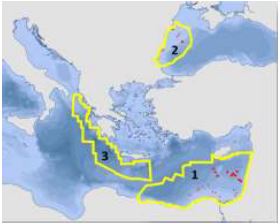 "As research from the Southeast Mediterranean region (1) progresses to the Black Sea (2), where the depth of water changes from an average of 1,500 meters (1) to 2,000 meters 2), and as hydrocarbon exploration technology develops, in the medium term (3-4 years), the interest of the industry will be gradually transferred to Western Greece and South Crete (3)," Mr. Bassias said, noting that "this development will place Greece in the center of innovative applications and of the safety of offshore drilling".

Mr. Bassias also linked the technical dimension with the interest of the international oil community in the wider region of south-eastern Europe and the geopolitics, highlighting our country's strategic position as the westernmost point of Eastern Mediterranean and the easternmost point of Western Mediterranean. Finally, he repeated that during the current period, more than 4 concessions are in the process of ratification by the Greek Parliament, while the promotion of five new research areas has already been launched at international conferences and exhibitions.